This is the Preface for the fifth edition of Computer Systems. Click here to access the Table of Contents.

The fifth edition of Computer Systems offers a clear, detailed, step-by-step exposition of the central ideas in computer organization, assembly language, and computer architecture. The book is based in large part on a virtual computer, Pep/9, which is designed to teach the basic concepts of the classic von Neumann machine. The strength of this approach is that the central concepts of computer science are taught without getting entangled in the many irrelevant details that often accompany such courses. This approach also provides a foundation that encourages students to think about the underlying themes of computer science. Breadth is achieved by emphasizing computer science topics that are related to, but not usually included in, the treatment of hardware and its associated software.

Computers operate at several levels of abstraction; programming at a high level of abstraction is only part of the story. This book presents a unified concept of computer systems based on the level structure of FIGURE P.1.

The book is divided into seven parts, corresponding to the seven levels of FIGURE P.1:

The text generally presents the levels top-down, from the highest to the lowest. Level ISA3 is discussed before Level Asmb5, and Level LG1 is discussed before Level Mc2 for pedagogical reasons. In these two instances, it is more natural to revert temporarily to a bottom-up approach so that the building blocks of the lower level will be in hand for construction of the higher level.

Level App7     Level App7 is a single chapter on application programs. It presents the idea of levels of abstraction and binary information and establishes the framework for the remainder of the book. A few concepts of relational databases are presented as an example of a typical computer application.

Level HOL6     Level HOL6 consists of one chapter, which reviews the C programming language. The chapter assumes that the student has experience in some imperative language, such as Java or Python—not necessarily C. The instructor can readily translate the C examples to other common Level HOL6 languages if necessary.

This chapter emphasizes the C memory model, including global versus local variables, functions with parameters, and dynamically allocated variables. The topic of recursion is treated because it depends on the mechanism of memory allocation on the run-time stack. A fairly detailed explanation is given on the details of the memory allocation process for function calls, as this mechanism is revisited at a lower level of abstraction later in the book.

Level Asmb5     Level Asmb5 is the assembly level. The text presents the concept of the assembler as a translator between two levels—assembly and machine. It introduces Level Asmb5 symbols and the symbol table.

The beauty of the unified approach is that the text can implement the examples from the C chapter at this lower level. For example, the run-time stack illustrated in the recursive examples of Chapter 2 corresponds directly to the hardware stack in Pep/9 main memory. Students gain an understanding of the compilation process by translating manually between the two levels.

Chapter 7, “Language Translation Principles,” introduces students to computer science theory. Now that students know intuitively how to translate from a high-level language to assembly language, we pose the fundamental question underlying all of computing: What can be automated? The theory naturally fits in here because students now know what a compiler (an automated translator) must do. They learn about parsing and finite-state machines—deterministic and nondeterministic—in the context of recognizing C and Pep/9 assembly language tokens. This chapter includes an automatic translator between two small languages, which illustrates lexical analysis, parsing, and code generation. The lexical analyzer is an implementation of a finite-state machine. What could be a more natural setting for the theory?

Level OS4     Level OS4 consists of two chapters on operating systems. Chapter 8 is a description of process management. Two sections, one on loaders and another on trap handlers, illustrate the concepts with the Pep/9 operating system. Seven instructions have unimplemented opcodes that generate software traps. The operating system stores the process control block of the user’s running process on the system stack, and the interrupt service routine interprets the instruction. The classic state transition diagram for running and waiting processes in an operating system is thus reinforced with a specific implementation of a suspended process. The chapter concludes with a description of concurrent processes and deadlocks. Chapter 9 describes storage management, both main memory and disk memory.

Level LG1     Level LG1 uses two chapters to present combinational and sequential circuits. Chapter 10 emphasizes the importance of the mathematical foundation of computer science by starting with the axioms of Boolean algebra. It shows the relationship between Boolean algebra and logic gates and then describes some common logic devices, including a complete logic design of the Pep/9 arithmetic logic unit (ALU). Chapter 11 illustrates the fundamental concept of a finite-state machine through the state transition diagrams of sequential circuits. It concludes with a description of common computer subsystems such as bidirectional buses, memory chips, and two-port memory banks.

Level Mc2     Chapter 12 describes the microprogrammed control section of the Pep/9 CPU. It gives the control sequences for a few sample instructions and addressing modes and provides a large set of exercises for the others. It also presents concepts of load/store architectures, contrasting the MIPS reduced instruction set computer (RISC) machine with the Pep/9 CISC machine. It concludes with performance issues by describing cache memories, pipelining, dynamic branch prediction, and superscalar machines.

Use in a Course

This book offers such broad coverage that instructors may wish to omit some of the material when designing a course. I use Chapters 1–7 in a computer systems course and Chapters 10–12 in a computer organization course.

In the book, Chapters 1–5 must be covered sequentially. Chapters 6 (“Compiling to the Assembly Level”) and 7 (“Language Translation Principles”) can be covered in either order. I often skip ahead to Chapter 7 to initiate a large software project, writing an assembler for a subset of Pep/9 assembly language, so students will have sufficient time to complete it during the semester. Chapter 11 (“Sequential Circuits”) is obviously dependent on Chapter 10 (“Combinational Circuits”), but neither depends on Chapter 9 (“Storage Management”), which may be omitted. FIGURE P.2, a chapter dependency graph, summarizes the possible chapter omissions.

Changes Made for the Fifth Edition

Improvements are in every chapter of this edition, and fall into one of two categories: a change in the virtual machine from Pep/8 to Pep/9 and other changes in content. The changes in content are too numerous to list, but major changes include the following:

Pep/8, the virtual machine for the two previous editions, has been superseded by Pep/9. As the instruction sets of the two machines are different, Pep/8 source and object programs are not compatible with those of Pep/9. Only a few instructions are affected, however, so much remains the same, including the set of eight addressing modes. The changes for Pep/9 include the following: 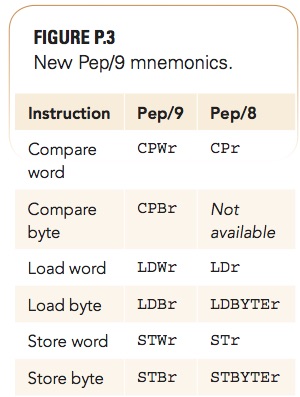 Computer Systems has several unique features that differentiate it from other texts on computer systems, assembly language, and computer organization.

Computer Systems answers the question: What is the place of assembly language programming and computer organization in the computer science curriculum? It is to provide a depth of understanding about the architecture of the ubiquitous von Neumann machine. This text retains its unique goal to provide a balanced overview of all the main areas of the field, including the integration of software and hardware and the integration of theory and practice.

The first edition of Computer Systems was published in 1999. From the beginning, its goal was to unify the presentation of computer systems using a single virtual machine, Pep/6 in the first edition, to illustrate the relationships between all seven levels of abstraction in a typical computer system. The text cut across many of the standard courses at the time (and even now), taking a breadth approach and, in so doing, sacrificing the depth of traditional details taught in standard assembly language, operating systems, computer architecture, computer organization, and digital circuit design courses.

The growing diversity of topics potentially relevant to an education in Computer Science and the increasing integration of computing with other disciplines create particular challenges for this effort. Balancing topical growth with the need to keep recommendations realistic and implementable in the context of undergraduate education is particularly difficult.

One response to the challenge is the evolution of the guidelines in precisely the direction that Computer Systems has occupied since its first edition. CS2013 restructures previous “bodies of knowledge,” deleting some old areas and creating some new ones. One of the new knowledge areas (KAs) of the guidelines is Systems Fundamentals:

In previous curricular volumes, the interacting layers of a typical computing system, from hardware building blocks, to architectural organization, to operating system services, to application execution environments … were presented in independent knowledge areas. The new Systems Fundamentals KA presents a unified systems perspective and common conceptual foundation for other KAs …

The support material listed below is available from the publisher’s website (go.jblearning.com/warford5e).

Pep/9 Assembler and Simulator     The Pep/9 machine is available for MS Windows, Mac OS X, and Unix/Linux systems. The assembler features the following:

The simulator features the following:

Lecture Slides     A complete set of about 50 to 125 lecture slides per chapter is available in PDF format. The slides include every figure from the text as well as summary information, often in bullet-point format. They do not, however, include many examples, so they leave room for instructor presentation of examples and instructor-led discussions.

Exam Handouts     A set of exam handouts, including reference information such as the ASCII table, instruction set tables, etc., are provided for reference during exams and study sessions.

Digital Circuit Labs     A set of six digital circuit labs provides hands-on experience with physical breadboards. The labs illustrate the combinational and sequential devices from Chapters 10 and 11 with many circuits that are not in the book. Students learn practical digital design and implementation concepts that are beyond the scope of the text itself. They follow the sequence of topics from the text, beginning with combinational circuits and progressing through sequential circuits and ALUs.